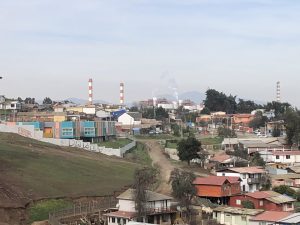 The municipality of Puchuncaví in central Chile turns greens after days of rain, but next to it are the smokestacks of the industries located in this development pole that turned this town and the neighboring town of Quintero into “sacrifice zones”, with the emission of pollutants that damaged the environment and the health of local residents, which will finally begin to be dismantled. CREDIT: Orlando Milesi / IPS

By Orlando Milesi
QUINTERO, Chile, Jul 4 2022 – A health crisis that in 20 days left 500 children poisoned in the adjacent municipalities of Quintero and Puchuncaví triggered the decision to close the Ventanas Smelter, in a first concrete step towards putting an end to a so-called “sacrifice zone” in Chile.

The measure was supported by President Gabriel Boric who reiterated his determination to move towards a green government.

The decision by the state-owned National Copper Corporation (Codelco), the world’s leading copper producer, was announced on Jun. 17, following a temporary stoppage of the plant eight days earlier, and was opposed only by the powerful Federation of Copper Workers.

The union reacted by calling a strike, which ended after two days, when the leaders agreed to discuss an organized closure of the smelter, which will take place within a maximum of five years. The smelting and refining facility will be replaced by another modern plant at a site yet to be determined.

The smelter is an outdated facility that has suffered repeated episodes of sulfur dioxide pollution, one of the chemicals causing the deteriorating health of the inhabitants of Quintero, a city of 26,000, and Puchuncaví, population 19,000.

Pacheco argued that the closure was due to “the climate of uncertainty that has existed for decades, which is very bad for the workers, their families and the community.”

Sara Larraín, executive director of the non-governmental organization Sustainable Chile, said the definitive closure of the plant does justice.

“It is the first step for Quintero and Puchuncaví to get out of the category of damage that is called a ‘sacrifice zone’ where for decades the emission standards have been exceeded,” she told IPS.

“Sacrifice zones” are areas that have suffered excessive environmental damage due to industrial pollution. Residents of poor communities in these areas bear a disproportionate burden of pollution, toxic waste and heavy industry. 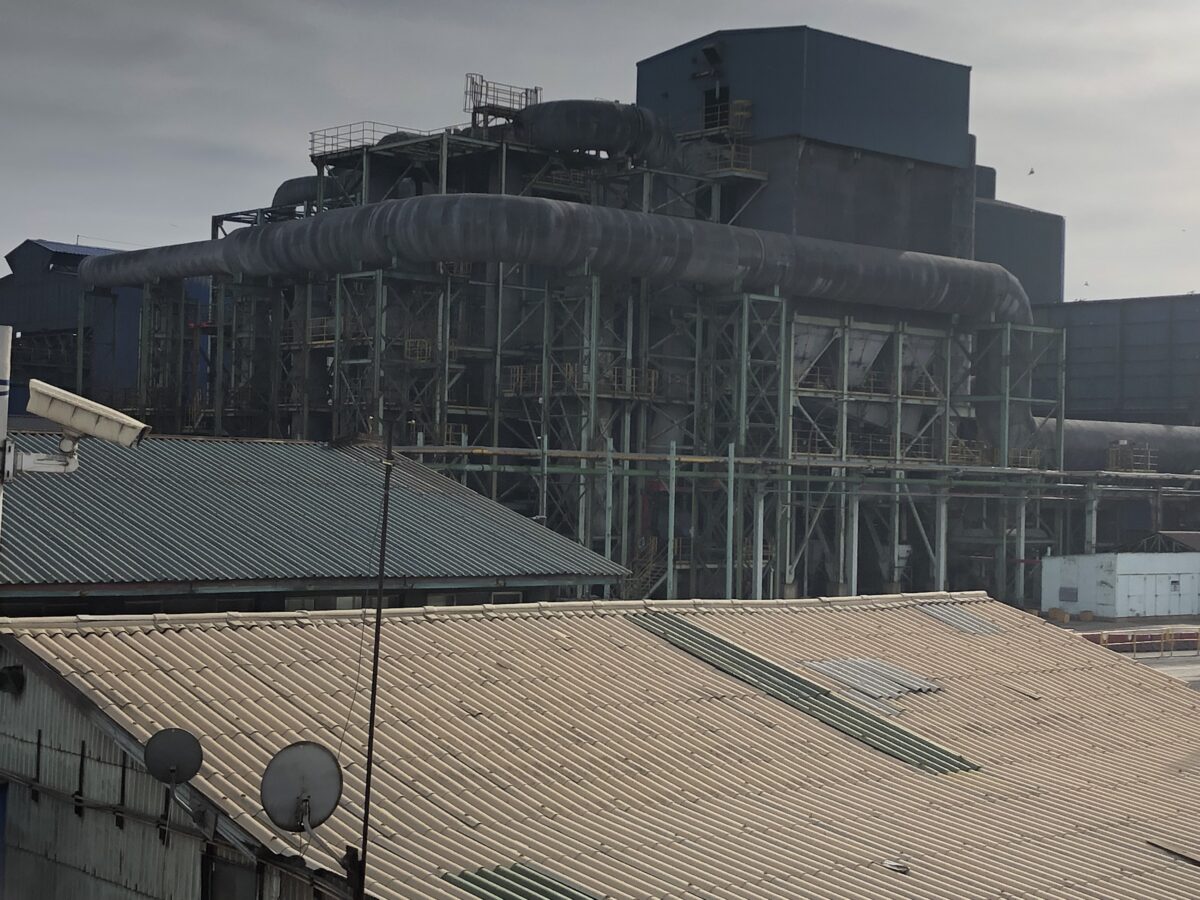 The back of the Ventanas Smelter reveals the poor operating conditions of the copper processing facility in Chile, which will be replaced by a new one within a maximum of five years at an as yet undefined site. CREDIT: Orlando Milesi / IPS

The two adjacent municipalities, 156 kilometers west of Santiago, qualify as a sacrifice zone, as do Mejillones, Huasco and Tocopilla, in the north, and Coronel in southern Chile, because the right to live in a pollution-free environment is violated in these areas.

In Quintero and Puchuncaví the main source of sulfur dioxide is the Ventanas Smelter, responsible for 61.8 percent of emissions of this element, causing widespread health problems.

Fisherman-diver forced to move away returns to Quintero

Carlos Vega, a fishermen’s union leader in Quintero, is the third generation of divers in his family.

“My grandfather, a fisherman, taught me how to make fishing nets. He had a restaurant on the coast,” he told IPS, visibly moved, adding that his two brothers are also fishermen and divers, who catch shellfish among the rocks along the coast.

“Fishing was profitable here. We were doing well and making money,” he said.

He added that people are well-organized in the area. “At one time we were the largest producer” of seafood and fish for central Chile, “because we had management and harvesting areas. But they had to close because of the pollution,” he said, describing the poverty that befell the local fishers in the late 1980s.

Then the health authorities found copper, cadmium and arsenic in the local seafood and banned its harvest. As a result, the small fishermen’s bay where they keep their boats and sell part of their catch lost their customers.

The crisis forced him to move to the south where he worked for 15 years as a professional diver in a salmon company. 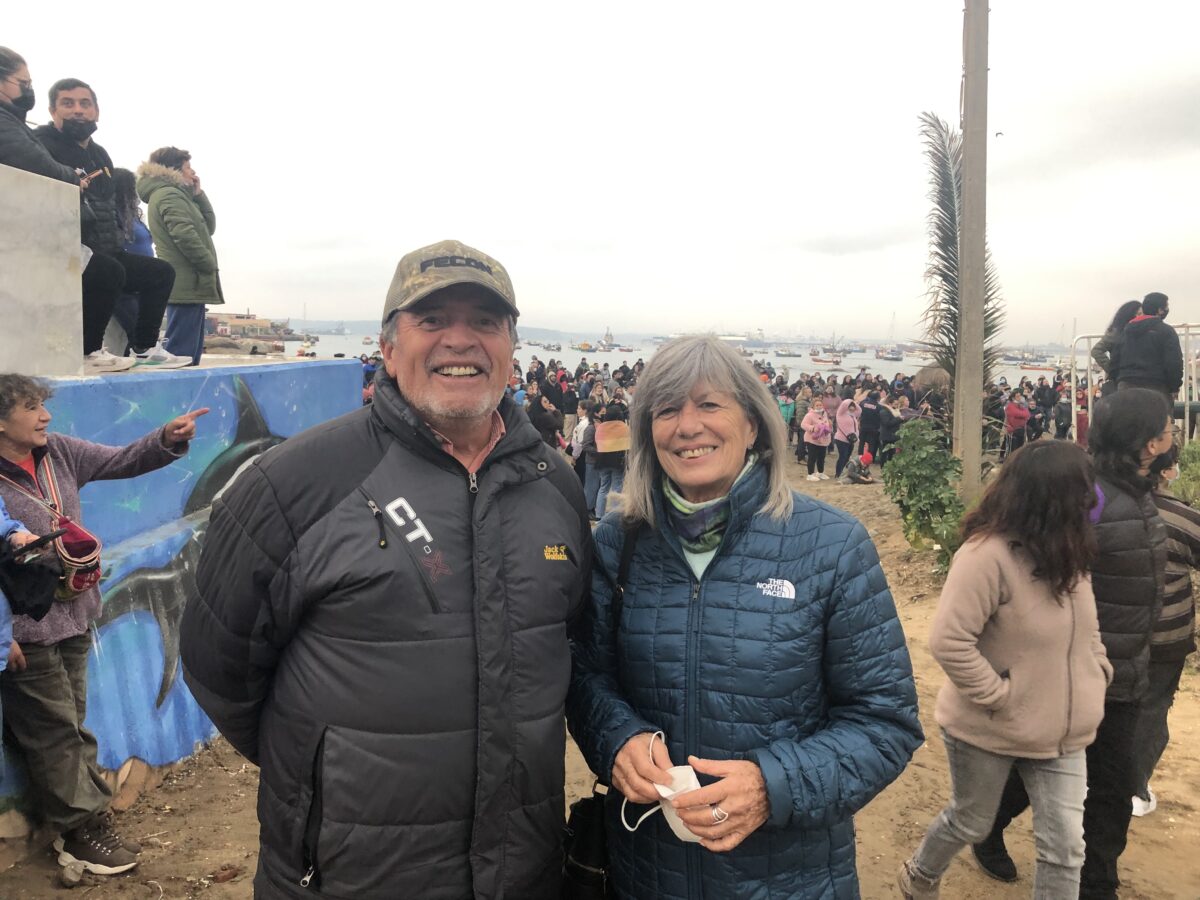 Carlos Vega, a fisherman, diver and trade union leader, and Kata Alonso, spokeswoman for Women of Sacrifice Zones in Resistance, pose for a photo in the bay of Quintero, during the celebrations in that town and in neighboring Puchuncaví for the announcement of the definitive closure of the Ventanas Smelter of the state-owned Codelco copper company, whose polluting emissions have damaged the local environment and made local residents sick for decades. CREDIT: Orlando Milesi / IPS

Today, back in Quintero, with two sons who are engineers and a daughter who is a teacher, he continues to dive, albeit sporadically. He participates along with 27 fishermen in the management area granted to the north of the sacrifice zone, where they extract shellfish quotas two or three times a year.

“The social fabric was broken down here, that is the hardest thing that has happened to us,” said Vega.

Codelco is not the only polluter

Codelco is the main exporter in Chile, a long narrow country of 19.1 million people sandwiched between the Pacific Ocean and the Andes Mountains where the big mines are located. In 2021 it produced 1.7 million tons of copper and its pre-tax income totaled nearly 7.4 billion dollars.

“Chile is the leading global copper producer and the world is going to become more electric every day,” said Pacheco. “And copper is the conductor par excellence, there is no substitute. We have to be ready for copper to be increasingly in demand in this energy transition.”

The president of Codelco emphasized that the wealth does not lie in exporting concentrate, which has 26 percent copper, but anodes with 99 percent purity, “and for that we need a smelter and a refinery.” 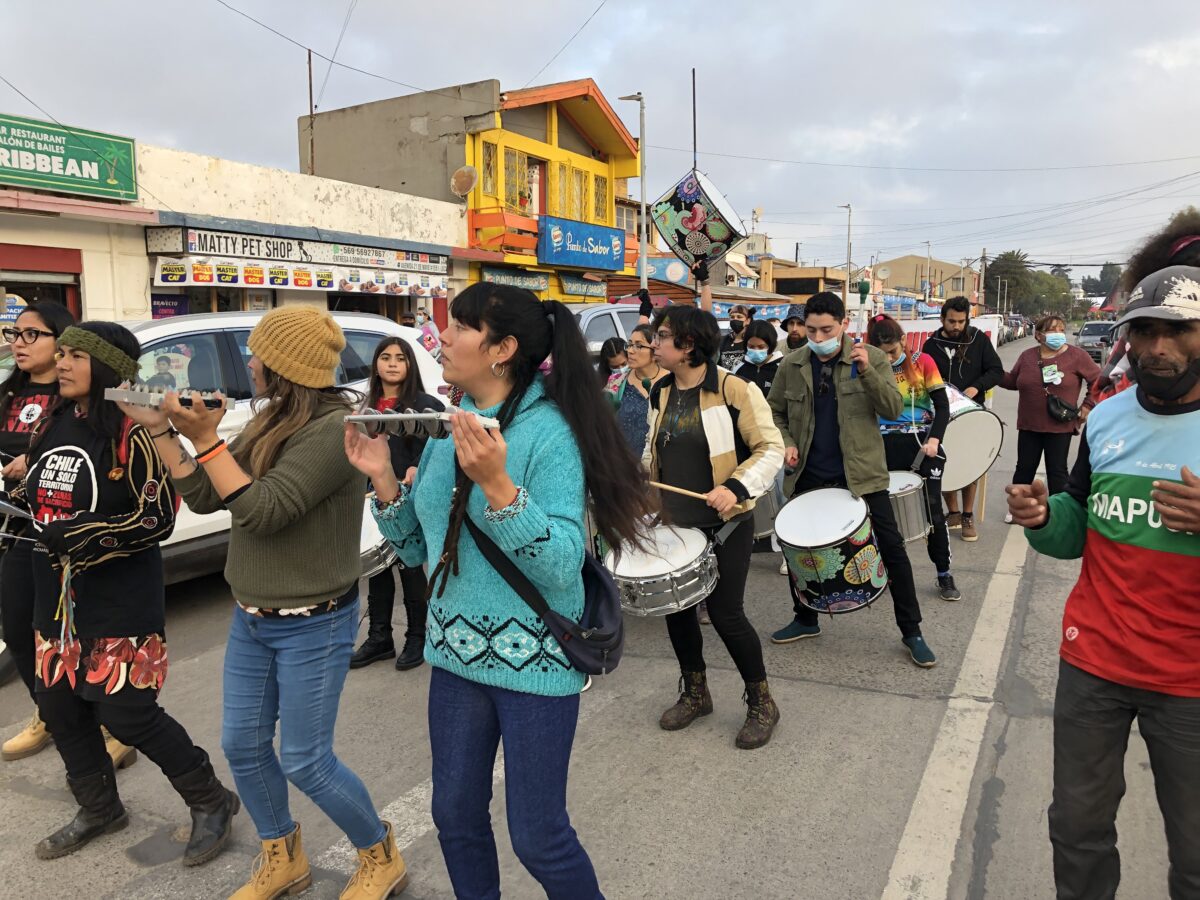 Young residents of Quintero and Puchuncaví came out in a drum line to celebrate the closure of the Ventanas Smelter and participate in a Festival for Life which lasted eight hours and was joined by a hundred local and national artists. Thousands of people gathered in the square which is on the edge of Quintero on Saturday, Jun. 25. CREDIT: Orlando Milesi / IPS

But the smelter, he explained, must be modern and not like Ventanas, which only captures 95 percent of the gases released. In the last three years, Codelco has lost 50 million dollars in the Ventanas smelter, which has a production scale of 420,000 tons. A modern Flash furnace produces 1.5 million tons and captures 99.8 percent of the gases.

The Ventanas Smelter employs 348 people and another 400 in associated companies. Half of them do not live in the area but in Viña del Mar, Villa Alemana or Quilpué, towns that are also in the region of Valparaíso, but are located far from the pollution.

The smelter is part of an industrial cluster that includes 16 companies.

After the latest health crisis, the authorities decreed contingency plans in plants and maritime terminals of six companies for emitting volatile organic compounds (VOCs) and applied an Atmospheric Prevention and Decontamination Plan.

Four coal-fired thermoelectric plants also pollute the area, one of which was definitively closed in December 2020 and another that was to be closed last May, although the measure was postponed.

According to environmentalist Larraín, when the smelter and the four thermoelectric plants are closed “better standards can be achieved, at least with respect to sulfur dioxide and heavy metals,” in Quintero and Puchuncaví. 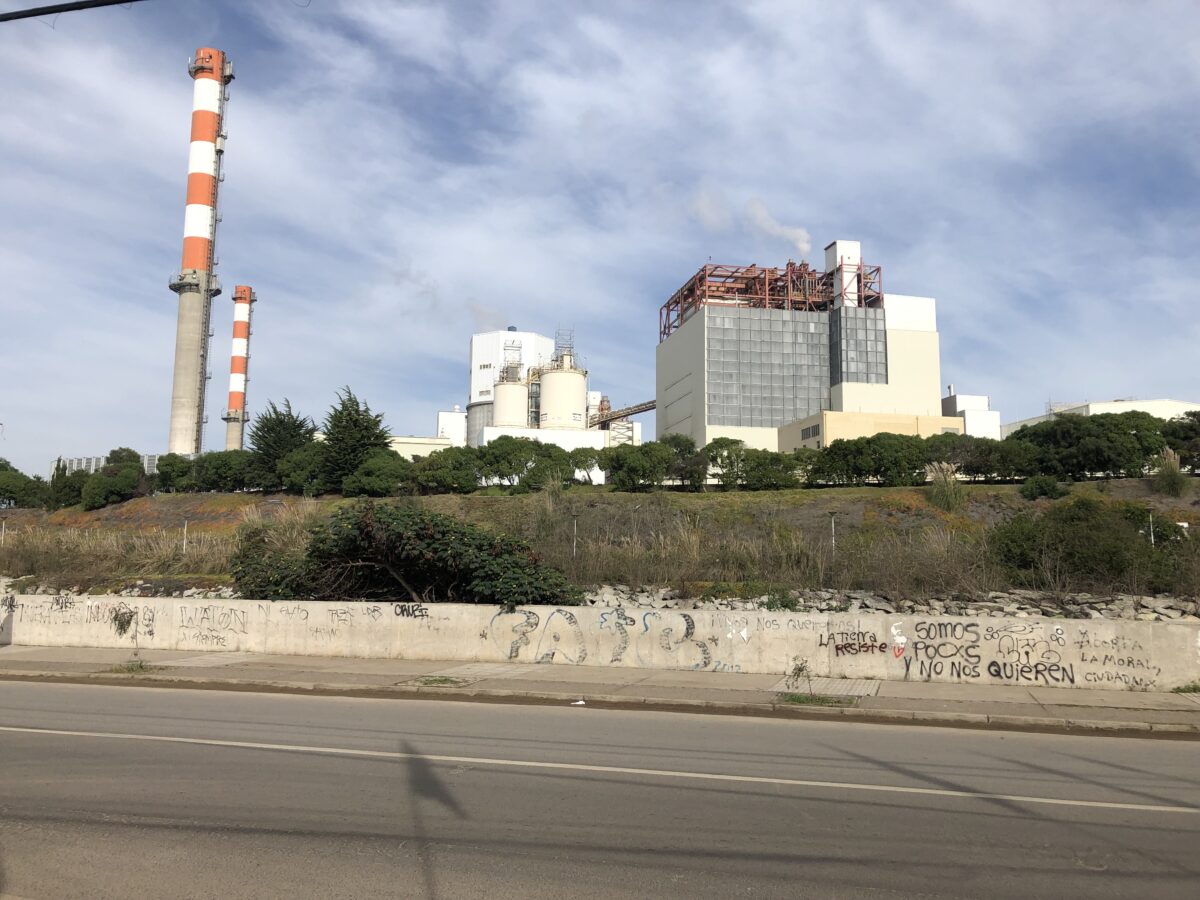 View from the road of the Ventanas Smelter, in central Chile, which has been temporarily shut down since Jun. 9 and whose antiquated facilities will be permanently closed in a maximum of five years. They are adjacent to populated areas that have been turned into so-called “sacrifice zones” where local residents periodically suffer environmental and health emergencies due to sulfur dioxide fumes. CREDIT: Orlando Milesi / IPS

The plan to continue decontaminating

Other pollutants are VOCs linked to the refineries of the state-owned oil company Empresa Nacional de Petróleo (Enap) and the private company Gasmar.

Kata Alonso, spokeswoman for the Mujeres en Zona de Sacrificio en Resistencia (Women in Sacrifice Zone in Resistance) collective, told IPS that “the prevention plan is good so that people don’t continue to be poisoned, so that they can breathe better, and so that the companies that pollute can close their doors, instead of the schools.

“There are companies that were built before the environmental law was passed that have not taken health measures. So what we are asking is for each company to be evaluated, and those that do not comply with the regulations must leave,” she said.

The repeated crises occur despite the fact that Chile’s environmental standards are below those of the World Health Organization (WHO).

For level 10 particulate matter, the mixture of solid particles and liquid droplets in the air, the ceiling in Chile is 150 milligrams per cubic meter (m3) and the WHO ceiling is 50.

For particulate matter 2.5 (fine inhalable particles), in Chile the limit is 50 milligrams per m3, while the WHO guideline is 25. And the Chilean ceiling for sulfur dioxide is 250 milligrams per m3 compared to the WHO’s limit of 20.

Three years ago, the Chilean Pediatric Society and the Chilean Medical Association requested that Chile raise its emission standards to WHO levels. 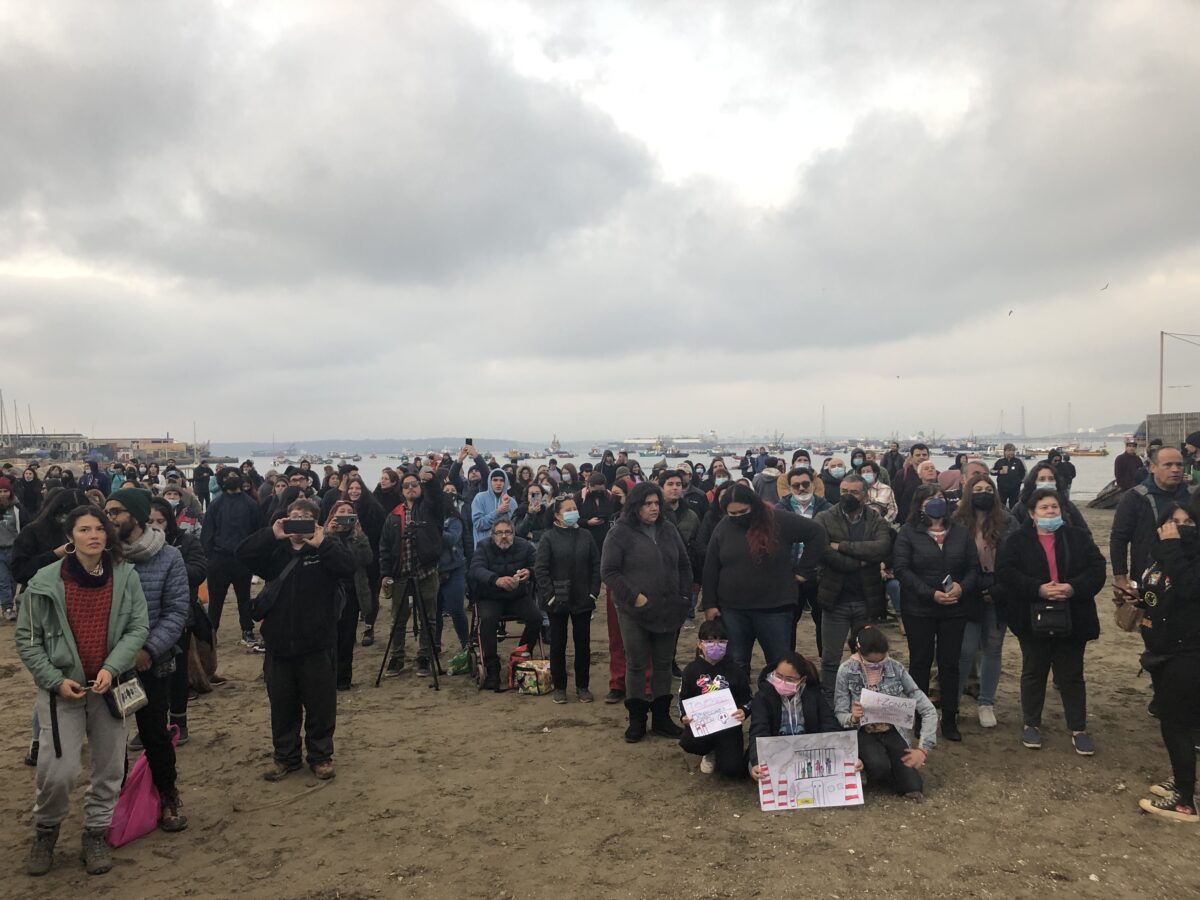 Part of the audience at the Festival for Life, which celebrated the closure of a copper smelter, that along with 15 other industrial plants turned the municipalities of Quintero and Puchuncaví into “sacrifice zones” in central Chile. Performances by musicians and other artists from around the country were interspersed with messages calling for a life free of pollution in the area. CREDIT: Orlando Milesi / IPS

Alonso the activist said that “my two neighbors died of cancer, whoever you ask in Puchuncaví has relatives who died of cancer. Today people are dying younger, breast and uterine cancer have increased in young women, and there are so many miscarriages.

“The statistic we have is that one in four children in Puchuncaví are born with severe neurological problems, down syndrome, autism. Here in Quintero there are two special education schools and many children with learning disabilities,” she said.

Larraín called for “government support for those who have been affected by irreversible diseases, asthma, lung cancer and others that have been proven to be caused by coal combustion and heavy metals.”

The Catholic University conducted a study using data on hospitalizations and mortality in Tocopilla, Mejillones, Huasco, Quintero and Puchuncaví.

“The rates for cardiovascular disease associated with industrial processes are clear. In some cases they are 900 percent higher. Calling them sacrifice zones is real, it refers to impacts that are occurring today,” said Larraín.

The environmentalist said it would be difficult to revive Quintero Bay “because it has a gigantic layer of coal at the bottom, dead phyto and zooplankton because water is used for cooling in industrial processes and is dumped back out with antialgaecides that kill marine life.”

She believes, however, that “over the years, the capacity for regeneration is possible, even in agriculture that has been lost due to sulfur dioxide emissions. There may also be a recovery in fishing and tourism.”

But Larraín demanded “a just transition that restores healthy levels and regenerates ecosystems so that local communities can sustain their economy in a healthy and ecologically balanced environment.”