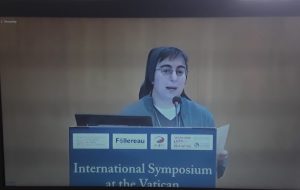 By Joyce Chimbi
NAIROBI, Jan 24 2023 – In the four years preceding the COVID-19 pandemic, the spread of leprosy or Hansen’s disease, seemed to be losing steam. Between 2016 and early 2020, new case numbers remained more or less constant.

The coronavirus pandemic has impacted leprosy services, making it harder for those affected by leprosy to receive treatment and disability care and disrupted leprosy case findings, leading to a large drop in cases from 2020 despite many undiagnosed and untreated leprosy cases.

“Leprosy is an ancient infectious disease, but it is curable. Early detection and treatment of leprosy are of utmost importance. We must promote finding new cases and ensuring they are treated. I have seen many people with disability for lack of treatment,” says Yohei Sasakawa, WHO Goodwill Ambassador for Leprosy Elimination.

The first international symposium was similarly held at the Vatican and was titled ‘Towards Holistic Care for People with Hansen’s Disease, Respectful of their Dignity’. The outcome was a lull in the spread of Hansen’s disease until the COVID-19 pandemic.

In the wake of disruptions caused by COVID-19, speakers and participants expressed fears and concerns that the situation has and will worsen.

The ongoing symposium is, therefore, a global appeal to leave no one behind in the fight against leprosy and to end stigma and discrimination. Additionally, to examine the progress made since the first international symposium and the barriers that still stand in the way to a leprosy-free world.

Importantly, the symposium included the launch ceremony for Global Appeal 2023 to End Stigma and Discrimination against Persons Affected by Leprosy.

As such, the symposium is an opportunity to discuss zero discrimination and hear testimonials and best practices with special attention to the role of religious leaders, perspectives of key actors from the global leprosy community, as well as recommendations and suggestions on the best way forward.

More broadly, the symposium is a platform for consideration of how socially vulnerable individuals and communities, especially those consisting of persons with disabilities due to diseases, have been affected by the impact of the coronavirus pandemic and propose ways to lift their plight.

Those who spoke on behalf of symposium organizers, including Pope Francis, emphasized that leprosy is curable and treatment in the early stages can prevent disability. Left untreated, leprosy can cause progressive and permanent damage to the skin, nerves, limbs and eyes.

A statement read out on behalf of Pope Francis encouraged the global community to emulate the good Samaritan, not to turn a blind eye and pass by as people affected by leprosy as shunned and ostracized from the community.

“We have become accustomed to passing by. We cannot forget our brothers and sisters. This is a wonderful opportunity to build inclusivity. To work on three areas: zero disease, helping those affected through care and treatment, spiritual nourishment and reinstating them back into the society,” the statement read in part.

Speaking at the symposium, a representative of Novartis said multidrug therapy (MDT) is the backbone towards zero leprosy, and its free availability has reduced the global disease burden by 95 percent in the past three decades.

Novartis MDT donations have helped to treat more than 7.3 million patients since 2000, significantly interrupting the transmission of leprosy and prevent disabilities. But there is still a long way to go.

Novartis said that an estimated 200,000 new cases of leprosy are detected every year, and an estimated 2.3 million people are living with a disability caused by leprosy.

Among the new cases, WHO says approximately 7,198 new cases were detected with grade 2 disabilities (G2D), and the new G2D rate was recorded at 0.9 per million population.

Disability in leprosy is defined by the WHO grading system; grade 0 indicates an absence of disability, while grade 1 means loss of protective sensibility on eyes, hands and feet. Grade 2 is more severe as it indicates the presence of deformities or visible damage to the eyes, hands or feet.

Sasakawa emphasized that it is not enough that people receive treatment, “for even after they are medically treated and cured, they remain afflicted by leprosy. Discrimination is age-old, deep-rooted and ongoing.

Novartis says collaboration is key and re-engaging those who may have been lost along the way. In all, speakers such as Dr Benedict Quao stressed the need to focus, prioritize, strategize and work together at the national, regional and global levels. This, he said, will produce a sustainable roadmap.

Quao leads the National Leprosy Programme in Ghana and is also a member of the Global Partnership for Zero Leprosy, underpinned by how aligned action can boost progress towards zero leprosy and zero stigma and discrimination.