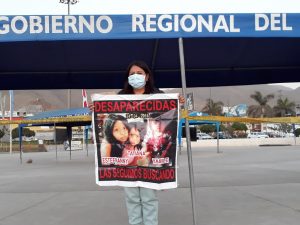 Patricia Acosta, Estéfhanny Díaz’s mother, carries a poster with a photo of her daughter and granddaughters Tatiana and Yamile. The three disappeared six years ago and so far the authorities, in her opinion, have done little to find them. Acosta, 50, poses in the Plaza Cívica de Ventanilla, a district of the port city of Callao, next to the Peruvian capital. CREDIT: Mariela Jara/IPS

By Mariela Jara
LIMA, Jun 22 2022 – “They mustn’t stop looking for her,” said Patricia Acosta, mother of Estéfhanny Díaz, who went missing on Apr. 24, 2016, along with her five-year-old and eight-month-old daughters, after attending a children’s birthday party in Mi Perú, a town in the coastal province of Callao, next to the Peruvian capital.

In an interview with IPS in the Plaza Cívica de Ventanilla, another district in Callao, Acosta, along with Jenny Pajuelo, Yamile’s aunt, called on the authorities to conduct a thorough investigation to find Díaz and her daughters Tatiana and Yamile, and to stop placing women who disappear under suspicion.

“She was 22 years old, she was a calm girl, at her young age she had learned to be a mother. I feel that my daughter did not leave of her own free will, but that she has been disappeared. That’s three lives that are missing!” exclaimed Acosta, while showing photographs of her daughter and granddaughters.

Pajuelo, Yamile’s aunt, said “it is a wound that is always open.” April marked the sixth anniversary of their disappearance.

The disappearance of women is a serious problem in Peru that is linked to forms of gender-based violence such as femicide, human trafficking and sexual violence.

A report by the Ombudsman’s Office revealed that, of the 166 victims of femicide registered in 2019 at the national level, 16 had previously been reported as missing to the national police, that is, one in 10.

Last year, the number of women murdered for gender-related reasons in Peru totaled 146, according to that autonomous public agency.

The Peruvian Penal Code defines femicide “as the action of killing a woman because she is a woman, in any of the following contexts: domestic violence, sexual harassment, abuse of power, among others,” which does not limit the crime to sexist crimes committed by the victim’s partner or ex-partner, as in other legislations within and outside the Latin American region.

In addition to femicides in this South American country of 32 million people, there is the growing phenomenon of missing women as another expression of gender violence.

The Ombudsman’s Office reported that between January and September 2021, 4,463 women, adolescents and girls went missing. This represented a nine percent increase in relation to the same period in 2020, when there were 4,052 cases. 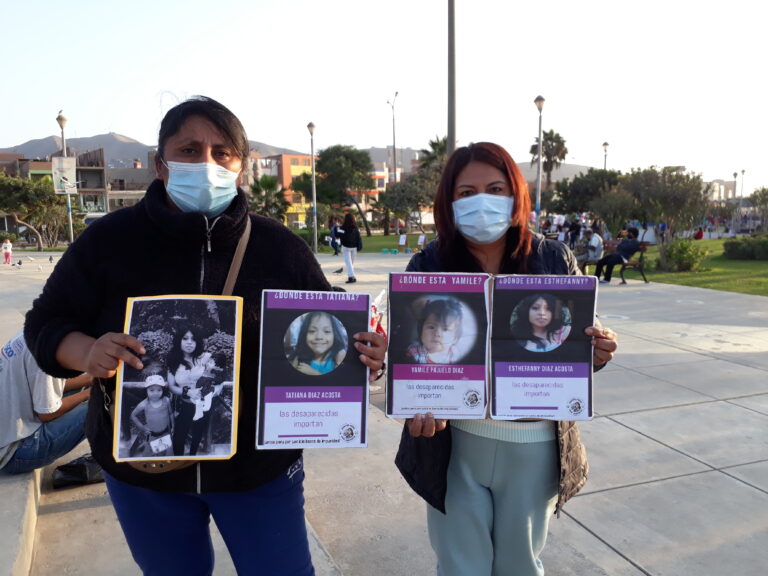 Jenny Pajuelo and Patricia Acosta hold posters of their missing loved ones. Pajuelo is the aunt of Yamile, who was eight months old when she disappeared along with her sister Tatiana and mother Estéfhanny Díaz. Acosta, a mother and grandmother, fights tirelessly for her family members to be found and not to remain on the growing list of missing women and girls in Peru. CREDIT: Mariela Jara/IPS

Erika Anchante, commissioner of the Ombudsman’s Office’s Women’s Rights section, told IPS that following its 2019 findings, the following year the Office began issuing the report “What happened to them?” to highlight the figures on disappearances and make the problem visible.

The last of these reports, published this June, underscored that in the first five months of 2022, 2,255 alerts on disappearances of women and girls were registered, with the aggravating factor that between March and May the number of cases of girls and adolescents reported missing increased.

“Unfortunately, the numbers are increasing every year, including during the pandemic, despite the restrictive measures that were taken in relation to circulation,” Anchante said.

She explained that the Ombudsman’s Office has issued several recommendations regarding improving the handling of complaints, training the personnel in charge of this process, and eliminating gender stereotypes faced by families, as well as myths such as waiting 24 or 72 hours.

“No, the complaints must be received immediately and dealt with in the same way, because the search must be launched under the presumption that the victim is alive. And the first few hours are crucial to be able to find them alive,” Anchante said. 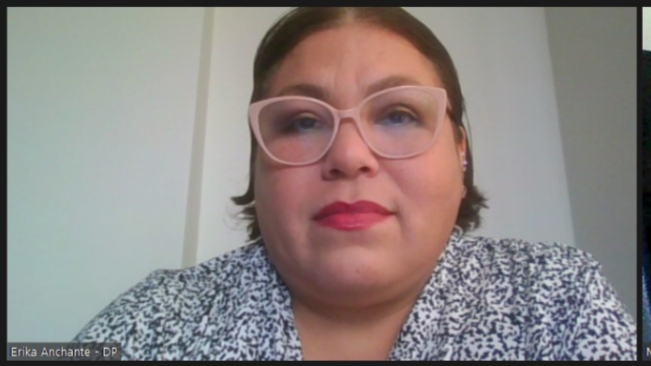 A screenshot of the Women’s Rights commissioner in Peru’s Ombudsman’s Office, Erika Anchante, taken during her interview via videoconference. The institution has proposed eliminating gender stereotypes in the handling of cases of missing women, one of the causes that delay investigations. CREDIT: Mariela Jara/IPS

Improvements in the regulatory framework

In April, the Ministry of Women and Vulnerable Populations published a new regulation that includes the disappearance of women, children and adolescents as a new form of gender violence.

It thus took up the proposal of the Ombudsman’s Office and civil society institutions such as the Flora Tristán Center for Peruvian Women for compliance with General Recommendation No. 2 of the Committee of Experts on Missing Women and Girls in the Americas of the Follow-up Mechanism to the Belem do Para Convention (MESECVI).

This committee monitors the States Parties’ compliance with the Inter-American Convention on the Prevention, Punishment and Eradication of Violence against Women, approved for the countries of the Americas and also known as the Convention of Belém do Pará, after the Brazilian city where it was signed in 1994.

Commissioner Anchante said she hoped the new ministerial norm, which is incorporated into the regulations of the Law to Prevent, Punish and Eradicate Violence against Women and Family Members, would improve the procedures for dealing with cases of missing women. 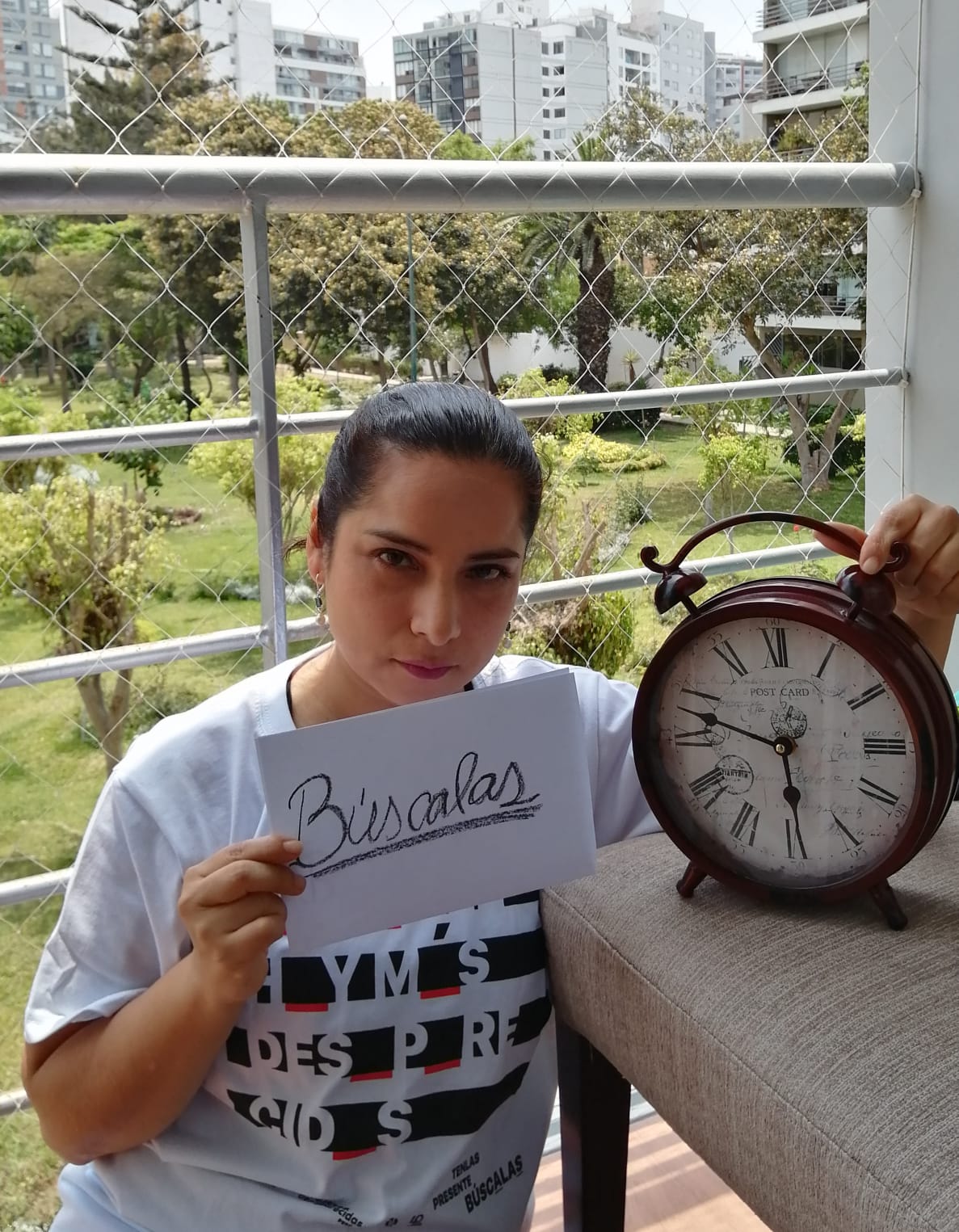 Liz Meléndez, director of the feminist Flora Tristán Center, holds a small card that says “Búscalas” (Look for them) – the slogan of activists fighting against the disappearance of women in Peru. She provided support in the high-profile case of Solsiret Rodríguez, a young woman missing since 2016, who was found four years later to have been a victim of femicide. CREDIT: Courtesy of Liz Meléndez

Many stories of violence following disappearances

Liz Meléndez, director of the non-governmental Flora Tristán Center for Peruvian Women, said the ministerial norm will contribute to raising awareness about the disappearance of women as a form of violence. It will also promote policies to improve the process of searching for missing women and punishing those responsible.

“The treatment they have been receiving is evidence of how the gender stereotypes that prevail in Peruvian culture have caused the State to fail to comply with its obligations, such as acting with strict due diligence according to international human rights standards,” she said.

“This means that it must take effective and immediate measures in the first hours of the disappearance and implement the necessary actions for the search and investigation,” she argued.

Meléndez said that behind the cases of missing women there are many stories of violence, some linked to femicides and others to human trafficking and sexual violence.

The activist complained that the victims’ relatives suffer humiliation in their search process, especially in police stations, and that they suffer delays in the investigations.

The feminist institution has proposed specific protocols for the search for missing women and argues that the fact that a woman is missing should be considered an aggravating factor in cases of femicide.

This demand arose from the Flora Tristán Center’s involvement in the case of Solsiret Rodríguez, a university student, activist and mother of two who disappeared in August 2016, whose remains were found four years later after a tireless struggle by her parents and unceasing demands from feminist groups.

In the end, it came out that she had been killed the very night she disappeared. 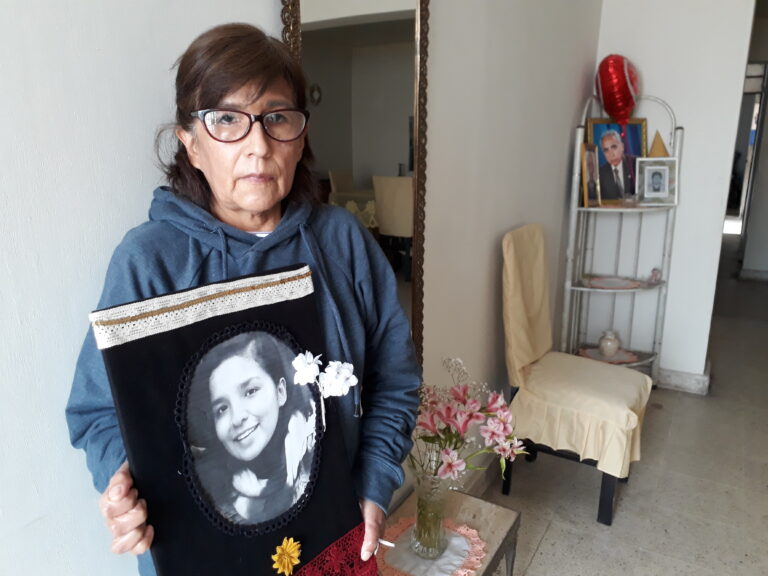 In the living room of her home in the San Martin de Porres district of northern Lima, Rosario Aybar shows the photo of her daughter Solsiret Rodriguez, who disappeared in August 2016. Her tireless struggle with support from feminist activists ensured that the case was not shelved, the victim’s remains were found and those guilty of her death were convicted this June. CREDIT: Mariela Jara/IPS

Rosario Aybar, or Doña Charito as she is known, endured countless sexist comments when she and her husband reported the disappearance of their daughter Solsiret, who in 2016 was 23 years old.

“I was told by the police that, in their experience, women my daughter’s age leave because they are hot-headed, not to worry, that she would be back,” she told IPS during a meeting at her home.

She faced such comments on the long road she traveled knocking on the doors of the different police stations and the prosecutor’s office, fighting so that her daughter’s case would not be shelved.

Thanks to this persistence, the two people responsible for Solsiret’s femicide were sentenced to 30 and 28 years in prison, on Jun. 3.

The convicted couple were Kevin Villanueva, Solsiret’s brother-in-law (the brother of the father of her children), who received the longer sentence, and his girlfriend at the time Andrea Aguirre. During the years that the search went on they claimed they knew nothing about what had happened to Solsiret. But part of the victim’s remains were found in Aguirre’s home in February 2019, after her arrest.

“Behind a missing woman there is a lot of aggression,” said Aybar, with a sad sort of serenity. “And I will explain to you why. Because they try to make them disappear; without a body there is no crime. With my daughter they used a ‘combo’ (a construction tool, used to beat her), a knife…. it’s cruel, it’s very cruel, there is so much hatred.”

Now she has become an activist to bring visibility to the problem of missing women. “I have transformed my pain into strength, that enabled me to move forward, the support of so many young women, otherwise, what would have become of me,” she said.

Patricia Acosta, Estéfhanny’s mother, has also had to learn to live with something she never imagined: the disappearance of her daughter and granddaughters. “I live with sadness, but I must also have joy, I still have my son who was 13 years old when his sister disappeared. I can’t drag him into this grief.”

In the case of her daughter and granddaughters, neither she nor the authorities suspect the person who was her partner when they disappeared.

Like Aybar, she participates in the Missing Women Peru collective that supports families who are searching for daughters, sisters, sisters-in-law and other relatives, fighting to keep the authorities, society and the media from forgetting them.

“We do not want them to be invisible to the State, their lives were cut short and we do not know what happened to them, and it is a human right to find them. Now we have to continue searching for truth and justice,” said Pajuelo, who keeps alive the memory of her nieces Tatiana and Yamile. “They would have been 11 and six years old by now,” she says, looking at their photos.