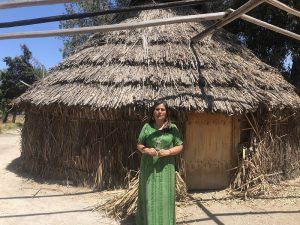 Mapuche activist Maria Hueichaqeo stands in front of the ruca (traditional Mapuche circular house) built on the Antu Mapu campus, which serves as the headquarters for the work of the Tain Adkimn Mapuche Indigenous Association, aimed at raising awareness in Chilean society of the situation of indigenous peoples and of how the Chilean state has mistreated them up to now. CREDIT: Orlando Milesi/IPS

By Orlando Milesi
SANTIAGO, Jan 24 2023 – Mapuche indigenous leaders were hit hard by what they see as a collective defeat: the rejection in a September referendum of a plurinational, intercultural constitution proposed to Chile by an unprecedented constituent assembly with gender parity and indigenous representatives.

“We felt devastated, some leaders cried. This defeat never crossed our minds because we thought this was going to change,” Nelly Hueichan, president of the Mapuche Trepeiñ Community, a women’s collective in the Lo Hermida municipality on the southside of Santiago, told IPS.

“For our people there has never been an easy solution…This is not the first time that we have been defeated,” added the 64-year-old activist.

“It was a tremendous challenge and an opportunity to change this society that has discriminated against us so much,” she said. “Now we have to stand up and resume the fight. We continue to organize and get ourselves ready.”

Hueichan came to Santiago when she was 17, from San Juan de la Costa, in the province of Osorno, 930 kilometers to the south. Her first job was as a domestic worker.

Thus, voters rejected the proposal approved by more than two-thirds of the 154 elected members of the constituent assembly that sought to turn Chile into a plurinational and intercultural state.

According to the last census, 1.8 million Chileans belong to an indigenous group. The Mapuches make up the largest native community (80 percent of the total). They come from the south of the country, but half have moved away from there, mainly to Santiago. The next biggest communities are the Aymaras (7.1 percent) and the Diaguitas (4 percent), followed by the Atacameño, Quechua, Rapa Nui, Colla, Chango, Kawésqar and Yagán peoples.

The rejected constitution contained “the dreams of those who were not and have not been in power; it proposed a new path for Chileans that the citizens did not want to take,” said Mapuche linguist and professor Elisa Loncón, who presided over the first period of the constituent assembly.

Salvador Millaleo, a Mapuche professor at the University of Chile Law School, told IPS that “without a doubt indigenous peoples were harmed and damaged the most, because the proposal that was rejected had the most comprehensive framework of rights that has ever been put forth.”

The campaign for the “no” vote ahead of the referendum argued that excessive rights would be given to indigenous people, giving them a privileged position over other Chileans. The fearmongering played on long-standing racism embedded in Chilean society. The Trepeiñ Community, presided over by Nelly Hueichan, brings together 35 Mapuche members who live in the municipality of Lo Hermida, mainly women with a similar background of labor and social discrimination. Their activities and meetings are carried out in a ruca (traditional Mapuche dwelling) that they also lend to other local residents to hold activities for social benefit. CREDIT: Orlando Milesi/IPS

This racism was nourished by the repressive policies imposed on indigenous people by successive governments, especially the 1973-1990 dictatorship of General Augusto Pinochet.

Back then, the conflict over ownership of land claimed by indigenous groups but now in private hands, especially of forestry companies, was declared non-existent. In addition, Mapuche activists were tried and sentenced as terrorists, when they carried out actions demanding the return of their ancestral lands.

Indigenous leaders are demanding reparations for the violation of the human rights of the Mapuche people during crackdowns by the authorities and argue that priority must be given to the issue of usurped lands.

The poor handling of the Mapuche question means that the southern regions where most of them live are the poorest in Chile, plagued by precarious jobs and high unemployment, as well as serious deficiencies in education, infrastructure and healthcare.

“A fairly generalized climate has been generated among the political elites that are opposed to or do not prioritize the rights of indigenous peoples,” said Millaleo.

This environment contrasts with the one prevailing during the 2019 protests under the government of rightwing president Sebastián Piñera (2018-2022), when Mapuche flags were raised in the massive demonstrations.

“Back then we were all very happy, but the leaders had little awareness that they had to consolidate this support, adopt strategies, seek broader backing in the indigenous world and among non-governmental organizations, and keep people in the territories informed,” said Millaleo.

The triumph of the “no” vote was the other side of the coin from the majority election of independent constituents in May 2021, which culminated in the installation two months later of a constituent assembly presided over by Loncón. 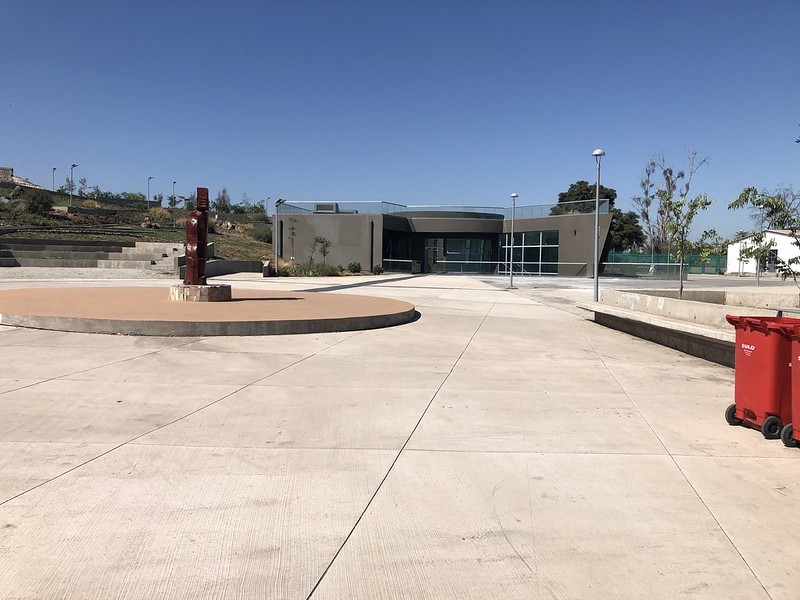 The Ceremonial Center of Indigenous Peoples, located on José Arrieta avenue in the municipality of Peñalolén, was inaugurated in May 2022. Sitting on 4.2 hectares of land it represents expressions and promotes traditions and customs of the Mapuche, Aymara and Rapa Nui cultures present in the municipality. CREDIT: Orlando Milesi/IPS

María Hueichaqueo chairs one of the 130 Mapuche organizations in Santiago: the Tain Adkimn Mapuche Indigenous Association in the working-class municipality of La Pintana, where the population is 16 percent indigenous.

At the same time, rightwing politicians convinced many voters that indigenous people would take over the Chilean territory if the new constitution was approved.

“Nowhere in the world have indigenous peoples seized land that was ancestrally ours,” said Hueichaqueo. “In some cases mechanisms, treaties or agreements have been created to solve conflicts over land.”

Hueichaqueo, 57, moved to Santiago from Chol Chol, a municipality in the Araucanía region, 700 kilometers south of the capital.

“I was born in a ruca (traditional Mapuche house) and at the age of seven months I came here with my mother. My father is a cacique (chief) and lives in the Lonko José Poulef Community in Chol Chol,” she told IPS at the Antu Mapu (Land of the Sun) campus, the largest University of Chile campus, where the Faculty of Agronomy and Veterinary Medicine is located.

According to Hueichaqueo, “what is happening is that the powers that be do not want to lose power. They feel that if the indigenous peoples have rights, their power will decline.”

The activist acknowledged that “we were unable to make a deeper analysis of the situation we were experiencing, in order to better understand what kind of representatives we needed in the constituent assembly.”

“Unfortunately not all of our indigenous brothers and sisters handled themselves well in the assembly,” she said. “Some took very extreme positions not in line with the real situation in the country. We are aware of the land claims and the violations of human rights. But that has to do with the State and we were talking about a new constitution, about everyone living together in the same territories.”

According to Hueichaqueo, the indigenous constituents distanced themselves from the organizations. To illustrate, she pointed out that some were elected with a large number of votes but then, in their own territories, a majority voted against the draft constitution.

Millaleo said that another mistake made by the indigenous representatives was “not daring to ask the radicalized groups that did not support the constituent assembly process to put down their weapons, and to clearly differentiate themselves from these groups.”

Hueichaqueo said that now the Mapuche people “are in a state of reflection. But we’re not sitting with our arms crossed, because indigenous peoples have a history of more than 500 years of mobilization and demands, and they are not going to stop us because of a constituent assembly that failed.” 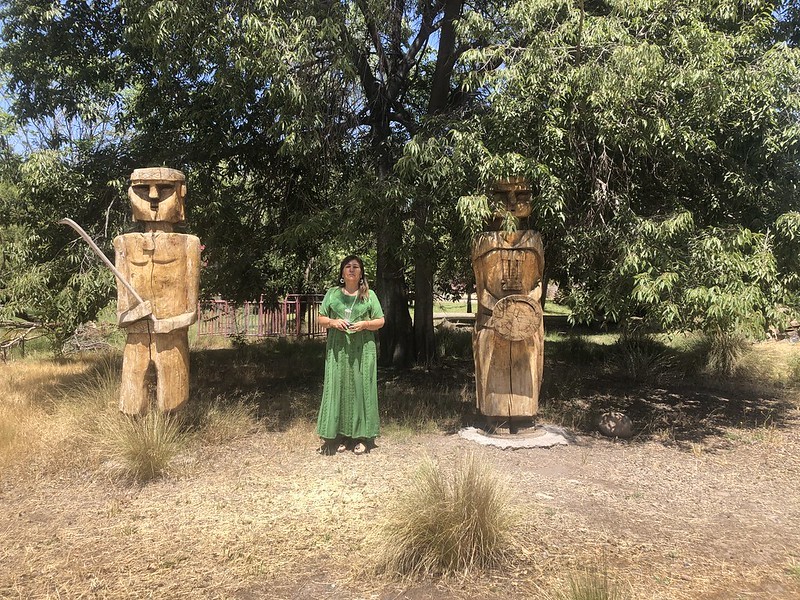 María Hueichaqueo stands surrounded by figures that represent men and women on the Antu Mapu university campus (“land of the sun” in Mapuche), in Santiago. They welcome students who attend an elective course to learn Mapudungun (Mapuche or Araucanian language) and to study indigenous inclusion in the history of Chile. CREDIT: Orlando Milesi/IPS

New attempt to rewrite the constitution

Hueichaqueo said she was “pessimistic regarding how much progress can be made in any new constitution that could be drafted because neither the State nor the government nor the political class are delivering democratic, participatory and governance guarantees” in this new process.

The Chilean Congress approved a new process with a committee of 24 experts elected by an equal number of votes from the Senate and the Chamber of Deputies, which will draft a new constitution. It will start working on Mar. 6, the same day that another technical-administrative commission of 14 experts also appointed by Congress will be installed.

On May 7, 50 members of a joint Constitutional Council will be elected by Chile’s voters, with a gender balance and a minimum number of indigenous representatives. It will have five months to set forth a new constitution drawn up based on the preliminary draft created by the experts.

On Dec. 17, the new draft constitution will be submitted to a referendum.

But according to Loncón, this strategy is aimed at continuing to exclude indigenous people.

“Today they intend to write the new constitution with a discredited political elite, which will never speak the language of the peoples because they are not the peoples, and we can suspect that they only seek to maintain their positions of power and their benefits,” she said.

For 50-year-old poet Elicura Chihuailaf, the first Mapuche to win the National Literature Prize, in 2020, it is difficult to understand the defeat “after it seemed that the majority of the population of Chile began to recognize it also has native heritage.”

Speaking to IPS from Cunco, 736 kilometers south of Santiago, he said that he sees ignorance among Chileans about the world view of native peoples.

“Everything that happened had to do to a great extent with the media, because of that superficial and alienated group that owns the media,” he asserted.

In his opinion, “history has been handled in a manner biased by the vested interests of a small group that I have called the superficial or alienated Chile, which has written its own version of history.”

“When you talk about development, it is said that the native peoples do not want it, but our peoples say we want development, but with nature and not against it,” he argued.

The award-winning poet said “the first step to recover the dignity of this country is for the popular classes to recognize their identity, and acknowledge that it comes from native peoples and that all cultures are important.”