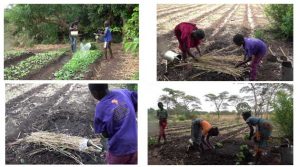 
“Most major tobacco producing countries use child labour in tobacco growing. Almost no cigarette can be
guaranteed to be free from child labour.”
British Medical Journal, 2015.

By Judith Mackay and Leonce Dieudonne Leonce
HONG KONG / LOME, May 17 2022 – Despite World Day Against Child Labour launched in 2002 by the International Labour Organization (ILO), little has changed over the past two decades for the millions of children who remain trapped.

To rescue children and achieve sustainable human and health rights improvements, laws that make corporations accountable and change power relations between workers and companies are needed, rather than voluntary industry codes and corporate charity.

The global tobacco industry, valued at 850B USD (2021) with the 6 largest companies earning 55 B USD in profit (2015), is profiting off the backs of an estimated 1.3 million children involved in tobacco production worldwide.

For many farming households in low-income countries, growing tobacco offers only a precarious livelihood, overshadowed by debt and the threat of poverty, in stark contrast to the profits of the big tobacco companies. Many smallholder farmers – who produce much of the world’s tobacco leaf – feel they have little choice but to enlist their children to work.

According to the global tobacco industry watch, STOP, tobacco companies have the power and resources to determine the level of wages and price of agricultural inputs, and can control the salaries that suppliers or contractors pay. However, their practices worsen children’s plight. They use layers of contracts to avoid direct responsibility for growers and workers, keep leaf prices low, and provide loans that keep farmers dependent.

To obscure the real problem, they use agricultural front groups, and partnerships with renowned organizations to undertake token community activities. All these effectively suppress progress towards diversification of strategies that would remove children from tobacco farming.

According to STOP, the first step to eliminating child labor in tobacco is to expose and remove tobacco industry interference.

Child labor in tobacco falls under “worst forms of child labor” due to the hazardous nature of handling tobacco. This mainly occurs in the tobacco fields and bidi factories, but can also occur throughout the whole tobacco cycle, for example, children selling cigarettes.

Children working with tobacco are placed at high risk of injury and illness, for example ‘Green Tobacco Sickness’ caused by nicotine poisoning through the skin. The absorption of nicotine causes symptoms which include nausea, weakness, dizziness, headaches and breathing difficulties. They are also exposed to large and frequent applications of pesticides, herbicides and fumigants that leads to a range of risks.

Child tobacco workers often labor 50 or 60 hours a week in extreme heat, use sharp and dangerous tools, lift heavy loads, and climb into the rafters of barns, risking serious injuries and falls.

In sub-Saharan Africa, 28% of children working in agriculture in general do not attend school at all, a blow to their best chance of avoiding the generational poverty trap.

Tobacco leaf is grown in more than 120 countries, but the incidence of child labor is under reported. In 2020, the US Department of Labor listed 19 countries which use child and forced labour in tobacco production is present.

Among them is Malawi from which tobacco imports to US were temporarily disallowed when Malawi children sued British American Tobacco (BAT) and Imperial Brands, seeking compensation for damages arising from child labor.

Meanwhile, tobacco industry corporate social responsibility (CSR) obscures the plight of children in low- and middle- income countries (LMICs). Tobacco industry-backed publicity includes information of how 204,000 children were removed or kept away from child labor detracting from the legal and human rights of children exploited or the just compensation required to undo decades of harm.

Some governments have yet to resist so-called CSR of tobacco companies and realize that the tobacco industry is the problem and not partners in the elimination of child labor. The global treaty, the WHO Framework Convention on Tobacco Control (WHO FCTC) recommends the adoption of farmer and worker-driven policies towards diversification that are sustainably financed and protected from tobacco industry interference.

Tobacco tax increases can potentially finance diversification programs, but advocates must struggle against the dilution of political will, brought on by token donations from the tobacco industry. According to the treaty, governments should ban and denormalize so-called CSR of the tobacco industry, as practiced in over 40 countries.

The Eliminating Child Labour in Tobacco Growing (ECLT) Foundation, sponsored by big tobacco companies influence the anti-child labor narrative across the world. Through the ECLT, tobacco companies partnered with and funded the ILO and governments to position themselves as safeguarding the rights of child worker and “being part of the solution”.

While ECLT achieved little in reducing child labor, it added to the glossy sustainability reports of tobacco companies designed to attract more investors.

After coming to the conclusion that tobacco industry sponsorship has not led to much progress in eliminating child labor, in 2018 ILO announced it will not renew ECLT and tobacco industry funding. However, links between the ILO and the ECLT remains.

While the United Nations Global Compact delisted tobacco companies from its program, the ECLT remains in the program despite civil society protests that the UNGC participation is a violation of the compact’s policies, the Model Policy for Agencies of the UN System on Preventing Tobacco Industry Interference and WHO FCTC.

The ILO Decent Work Agenda and various Conventions are instruments to facilitate prohibition of forced or compulsory labor. But if these are not implemented, our children are betrayed and remain entrapped.

Prof Judith Mackay is Asian is the Director of the Asian Consultancy on Tobacco Control, Hong Kong, and Leonce Dieudonné Sessou is Executive Secretary of the African Tobacco Control Alliance, Togo